The Trustees have reviewed the extent to which their policy from the SIP relating to the exercise of rights (including voting rights) attaching to the investments was followed over the Scheme Year and this statement confirms the outcome of that review.

The Scheme’s assets are invested in pooled funds and some of those funds include an allocation to equities. Where equities are held, the investment manager has the entitlement to vote.

At the end of the Scheme Year, the Scheme invested in the following funds which included an allocation to equities:

Whilst the BlackRock ALMA Fund has an allocation to equities, the exposure is obtained via derivatives which do not have any associated voting rights.

The Trustees' Policy Relating to the Exercise of Rights

The Trustees' policy in relation to the exercise of the rights (including voting rights) attaching to the investments is set out in the SIP. The SIP was updated during the Scheme Year to comply with new legislation which required additional information to be stated about the nature of the arrangements in place with the investment managers. Part of the new wording provided a more detailed explanation of the Trustees' policy relating to the exercise of rights.

A summary of the Trustees' policy in relation to the exercise of the rights (including voting rights) attaching to the investments is as follows:

Has the Policy Been Followed During the Scheme Year?

The Trustees' opinion is that their policy relating to the exercise of rights (including voting rights) attaching to the investments has been followed during the Scheme Year. In reaching this conclusion, the following points were taken into consideration:

*Note the voting analysis was over the year ending 31 December 2020 (for BlackRock) and 30 June 2021 (for Baillie Gifford and LGIM) because this was the most recent data available at the time of preparing this statement. The Trustees is satisfied that the analysis provides a fair representation of the investment managers' voting approach over the Scheme Year.

A summary of the investment managers' voting records is shown in the table below.

These voting statistics are based on each manager’s full voting record over the 12 months to 31 December 2020 (for BlackRock) and 30 June 2021 (for Baillie Gifford and LGIM) rather than votes related solely to the funds held by the Scheme.

Use of Proxy Voting Advisers

The Trustees have reviewed the voting behaviour of the investment managers by considering the following:

The Trustees have also compared the voting behaviour of the investment managers with their peers over the same period.

The Trustees' key observations are set out below.

Based on information provided by the Trustees' Investment Adviser, the Trustees have identified significant votes in nine separate categories. The Trustees consider votes to be more significant if they are closely contested. i.e. close to a 50:50 split for and against. A closely contested vote indicates that shareholders considered the matter to be significant enough that it should not be simply “waved through”. In addition, in such a situation, the vote of an individual investment manager is likely to be more important in the context of the overall result.

Although Baillie Gifford tends to support management in director proposals, over the course of the Scheme Year, the investment manager has demonstrated a willingness to vote in favour of shareholder proposals (which typically means voting against management).

The analysis indicates that BlackRock’s voting pattern has changed materially over the last 12 months.

Although the manager tends to vote in favour of management proposals to a greater extent than is the case with many of its peers, there is evidence of BlackRock opposing director proposals on a range of issues.

Last year’s analysis indicated that BlackRock would tend to oppose shareholder resolutions designed to address issues such as climate change, human rights and forced labour. However, this year’s analysis reveals a materially different picture with the manager much more willing to support shareholder proposals of this nature.

The revised voting approach is consistent with public statements made by BlackRock over the last two years. In particular, in January 2020, BlackRock made a public commitment to vote against management when a company’s management team is failing to make progress on climate change issues. Later that year, in July 2020, the manager stated that it had “implemented a new approach to shareholder proposals”. The manager now states that supporting shareholder proposals “plays an increasingly important role in our stewardship efforts around sustainability”.

Relative to its peers, LGIM shows a higher tendency to vote against directors’ proposals. The manager has also shown strong support for shareholders’ proposals aimed at tackling a broad range of environmental and social issues.

The manager’s voting policy is detailed and includes clear rationales and rules for when it will vote against directors’ recommendations on a proposal.

LGIM voted against around 20% of director proposals during the year and showed a tendency to do this in contentious votes. This suggests that LGIM is taking its stewardship responsibilities seriously.

Based on the analysis undertaken, the Trustees have no concerns regarding the voting records of Baillie Gifford, BlackRock or LGIM.

The Trustees will keep the voting actions of the investment managers under review.

The table below records how the Scheme’s investment managers voted in the most significant votes identified by the Trustees. 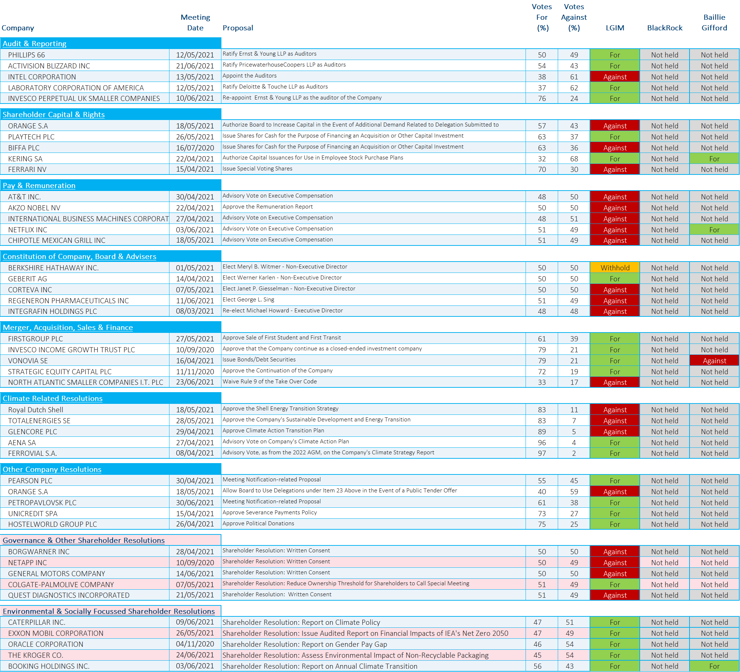 The BlackRock column of the above table has ‘not held’ for every entry, this is because the Scheme’s BlackRock Aquila Life Market Advantage Fund holding gains exposure to equities via derivatives which do not have any associated voting rights.